The GECKO partnership is made up of thirteen Higher Education Institutions from South East Asian and European countries including Thailand, Indonesia, Philippines, Sweden, Lithuania, Spain, Italy and France. 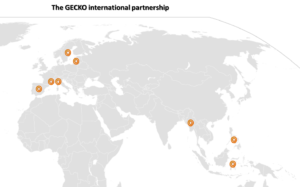 Burapha University (BUU) is one of Thailand’s public universities. It is in the coastal town of Saen Suk, near the beach of Bangsaen in Chonburi Province. It was established on 8 July 1955, originating from Bangsaen Educational College which was the first regional tertiary educational institute. The university offers degrees in more than 50 programs of study, including 75 master’s programs, three EdD programs, and 22 PhD programs in Social Sciences, Health Science, and Science and Technology.

Ubon Ratchathani University (UBU) was founded in 1987 as a regional campus of Khon Kaen University and established as a university by Royal Charter in 1990. UBU’s vision is to be a leading teaching and learning university in the Greater Mekong Sub-region, producing graduates of high quality, and creating knowledge and innovations for a sustainable society.

Gadjah Mada University> (UGM) is a public research university located in Yogyakarta. It has been credited as one of the most prestigious universities in Indonesia, along with the Bandung Institute of Technology and the University of Indonesia. It comprises 18 faculties and 27 research centers covering a wide range of areas and enrolls approximately 55,000 students.

The Bandung Institute of Technology or Institute of Technology, Bandung (ITB) is a state, coeducational research university. ITB has been credited as one of the most prestigious universities in Indonesia, together with Gadjah Mada University and University of Indonesia. As of early 2016, ITB had nine undergraduate study programs internationally accredited by an independent U.S.-based accrediting institution in various engineering specialties. 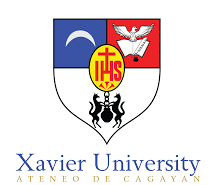 The Ateneo de Manila University (AMU) is a private research university in Quezon City. The undergraduate and graduate programmes are coeducational and organised into four schools, collectively known as the Loyola Schools, which are located at its main campus at Loyola Heights. The Commission on Higher Education has recognized its units in biology, physics, chemistry, mathematics, information technology, entrepreneurship education, English literature, philosophy, sociology, psychology, and business administration as Centers of Excellence.

University of the Philippines

The Polytechnic University of Turin (Politecnico di Torino) is a partly-public engineering university based in Turin, Italy. Established in 1859, it is Italy’s oldest technical university. The university offers several courses in the fields of Engineering, Architecture and Industrial Design. According to ARWU Ranking 2013, Politecnico Di Torino is 1st in Italy and 8th in Europe for Engineering. and in the same year according to QS World University Rankings among the engineering universities it was ranked 68th in the world (in the top 15 in Europe).

Uppsala University (UU)> is a research university in Uppsala, Sweden, and is the oldest university in Sweden and all of the Nordic countries still in operation, founded in 1477.  It ranks among the world’s 100 best universities in several high-profile international rankings. The university has nine faculties distributed over three « disciplinary domains »: Arts and Social Sciences , Medicine and Pharmacy, Science and Technology.

The National University of Distance Education, known in Spanish as Universidad Nacional de Educación a Distancia (UNED), is a distance learning and research university and is the only university run by the central government of Spain. It has headquarters in Madrid, Spain, with campuses in all Spanish autonomous communities. UNED combines traditional onsite education with distance learning programs. With over 260,000 students, UNED is the largest university in Spain and the second largest in Europe.

Vilnius Gediminas Technical University (VILNIUS TECH) is a public university in Vilnius, Lithuania. It currently has 10 faculties, 14 research institutes, 33 research laboratories, and four training centers. According to the QS World University Rankings, VILNIUS TECH is in the top four percent of world universities. Measuring student mobility in the ERASMUS exchange program, VILNIUS TECH is the most popular university in Lithuania for foreign students.

The University of Montpellier (UM) is a French public research university in Montpellier in south-east of France. Established in 1289, the University of Montpellier is one of the oldest universities in the world. UM is a world-class higher education institution which is dedicated to training innovators and leaders, at Bachelor and up to PhD level. It is a multidisciplinary university that federates 16 schools which are organized into two main complementary domains: Science, Technology, Health, Law, Economics and Management. UM’s strategy revolves around inter-disciplinary and multi-skill training programs.